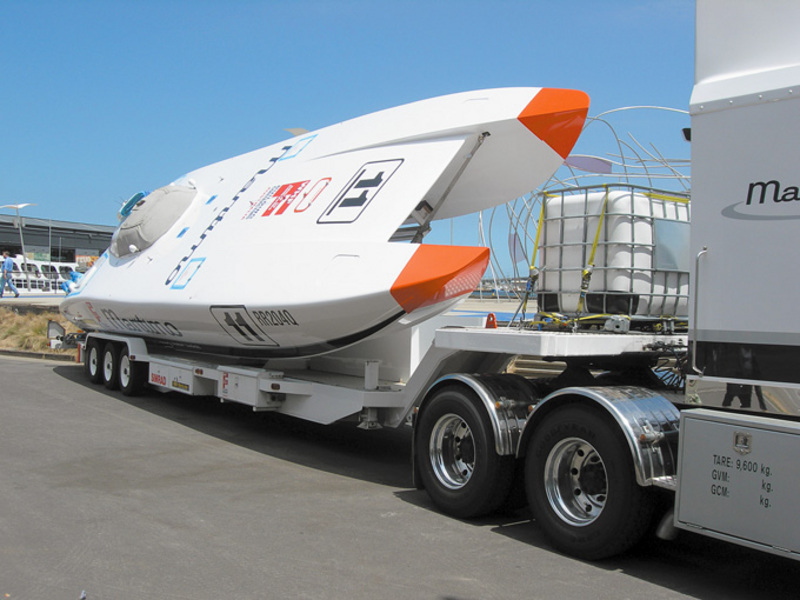 These super charged craft - which in Class One can reach speeds well in excess of 220 kph in race trim ...
There were several vessels exhibited at the Melbourne Boating and Lifestyle Show, but none quite so fast as the half-dozen superboats on display, ahead of their participation in the upcoming Offshore Superboat Championships.

These super charged craft - which in Class One can reach speeds well in excess of 220 kph in race trim - were at a temporary standstill for the three days of the Boat Show before roaring into action on the following two weekends for the Hobson's Bay Offshore Powerboat Classic and the Williamstown Offshore Powerboat Classic. These two Melbourne based events form stops three and four respectively of the Offshore Superboat Championships, before the series moves on to New South Wales and Queensland for the final three race stops. The two Powerboat Classic events are free to spectators.

The three Class One superboats in the boat show display range between 13.5m and 15m in length, approach five tonnes in weight and are powered by twin 950hp engines - Maritimo features twin V12 Lamborghini engines, Simrad has twin V8 super-charged Mercury engines and Impact Steel has twin V8 Stirlings. In addition to the Class One vessels, the display will also feature boats from the other championship classes competing in the Offshore Superboat Champ-ionships, including the Super-Vee Lite class and the Supercat Outboard class. A raised viewing platform allowed visitors to look directly into the cockpits and get a feel for what it's like to skim across the water at speeds of over twice the maximum car road limit.

Superboat racers will also make appearances at the display throughout the show, to chat with visitors and talk about the vessels and their capabilities.